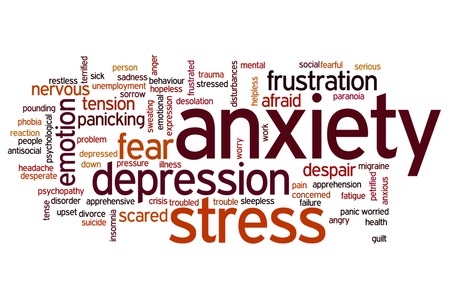 I’ve had issues with Anxiety and Mental Health disorders for as long as I can remember.  When I was aged 8 I was diagnosed with Obsessive Compulsive Disorder (something I’ll write about in the future), which I believe stemmed from a severe phobia of being sick (emetophobia).  My OCD has manifested itself in all sorts of different ways (it’s not all about cleaning and washing your hands, you know!), especially over the last 2 years.

Today, what I’d like to write about is my experience with Generalised Anxiety Disorder.  A condition I was diagnosed as suffering from; back in January 2015.

Throughout the second half of this year, I’ve been upfront and honest about my mental health issues.  I’ve previously written about how I suffered from Post Natal Depression & Anxiety following the birth of my son in 2013.  I’d like to continue to be open and honest about how my mental health affects my day to day life. In many ways it’s cathartic to write about but also I’m very much of the opinion, the more we talk about mental health, the more we can break down the stigma that still seems to be ever present even in this day and age.

So, Generalised Anxiety Disorder….what is it?

Generalised Anxiety Disorder (GAD) can be defined as a disorder in which the sufferer feels in a constant state of high anxiety and is often known as ‘chronic worrying’ or a ‘free floating’ anxiety condition. (credit: Anxiety UK)

As I mentioned, I’ve always suffered from varying degrees of anxiety throughout my life.  I’ve ALWAYS been a worrier, despite my confident exterior, on the inside there has always been a battle of wills going on.  Desperately trying not to let my worries overcome me, whilst also in some strange way, ensuring I pay enough attention to the worries circling my mind so that I don’t ‘get caught out’.

What do I mean by that?  Let’s dissect the last sentence a little.

If I didn’t have something to worry about, to fret over, to even obsess over (enter the OCD), I would worry about that.  I would almost worry that if I was feeling good and worry free, that something would come along and bite me on the backside when I least expected it.

I would feel like I couldn’t relax, I couldn’t live in the here and the now, for fear of what might be lurking round the corner.

So, what would I worry about?  What was so frightening that it was having this effect on me?

Anything.  Absolutely anything is the answer to that question.  It could be something so small and minor as worrying that I might get a cold and have to cancel a night out I had arranged (this was more pre-Motherhood).  I would literally be panic stricken that I might develop a minor illness that would render me unable to stick to plans I had made.  Looking back, it sounds ridiculous, surely it would be seen as one of those things.  I’d got a cold, it’s an inconvenience but I’ll just rearrange the night out and ride the minor irritation out until I’m better.  But no, I couldn’t do that.  I would begin to catastrophize, if I got a cold, I wouldn’t be able to go to work perhaps; therefore I might get the sack.  I wouldn’t be able to go on my night out; my friends might fall out with me.

This is just one example of a worry.

Another example would be the irrepressible fear that I had said something offensive to someone.

The mind is an incredibly powerful thing, this is something I have learnt especially over the last year or 2.  It is capable of pretty much anything.

So, imagine I’m on a night out, the drinks are flowing, I’m having a great time.  Life is good.  I wake up the next morning, perhaps with a hangover and suddenly I’m struck with fear.  I’m talking overwhelming, sweaty palm, dry mouth fear.  I’m worried I said something to a friend/acquaintance that I shouldn’t have.  Cue a cycle of worrying that is very difficult to break.

This is what is going round in my head, and when I say it’s a cycle that is near on impossible to break, I mean it.  I can think of nothing else, and if for a second I do forget what I’m worrying about, I soon remember and the fear becomes all the more overwhelming once again.

This is the cycle I used to find myself in every single day.  The 2 examples above are just 2 examples of many different scenarios I have found myself in on a regular basis.

Generalised Anxiety Disorder is scary.  It can make your fears and your worries seem real.  At its worst, it has left me feeling irritable, tense and exhausted.  Exhausted from the incessant worrying, exhausted from the constant ‘what if’s?’ circling my brain.

What if I get food poisoning from this plate of food?  What if I don’t make this bottle up properly and make my baby poorly?  What if I’ve upset someone and they will never talk to me again?

I simply did not have the tools nor the strength to get a hold of this irrational worrying.  This in part, is what led to me reaching my lowest point at the very beginning of this year.

I was at my lowest ebb.

Now, things are different.  Yeah, I still worry, no amount of medication, therapy or counselling will change that.  However, it doesn’t overwhelm me like it used to.  I’ve taught myself to gain perspective, to ride the worries out.  I think to myself ‘what is the worst that can happen?’ or ‘will you still be worrying about this, this time next week?’.

Nowadays, I take each hour as it comes, I don’t fret so much about the future, or worry about what I did or didn’t do in my past.  I’ve learnt to use the rational side of my brain more and ignore the irrational thoughts and worries.

Some useful resources if you feel you would like to learn more about Anxiety.