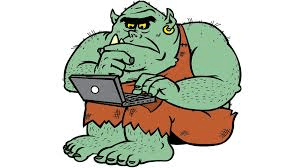 Being a bit of a news buff, I use Twitter to keep abreast of breaking news. I love the fall outs that often occur between celebrities and I also enjoy engaging with fellow writers too.

Much has been publicised in recent years regarding the act of Trolling.

Taken from Wikipedia, this is the definition of an internet Troll.

In Internet slang, a troll (/ˈtroʊl/, /ˈtrɒl/) is a person who sows discord on the Internet by starting arguments or upsetting people, by posting inflammatory,[1] extraneous, or off-topic messages in an online community (such as a newsgroup, forum, chat room, or blog) with the deliberate intent of provoking readers into an emotional response[2] or of otherwise disrupting normal on-topic discussion,[3] often for their own amusement.

I’ll be honest, I’ve been on the receiving end of the odd Twitter troll in my time. As I’ve become more and more of an avid Twitter user my incidences with trolls have become more frequent.  However, I like to think I’ve got a quite a thick skin, and rather than get annoyed by these individuals spouting vitriolic from behind their device, I pity them instead.

Of course, there are many celebrities and revered Tweeters out there who receive some absolutely disgusting abuse, seemingly on a daily basis. I can imagine the block button gets frequent use.

Some may argue it’s par for the course, if you’re going to share your thoughts, opinions as well as your business on a social media site then you’re only asking for trouble. I don’t agree with this, mainly because I was brought up knowing there was a certain way to behave.  I could never imagine calling someone a rude word via Twitter for absolutely no good reason, nor could I imagine casting empty and vicious threats either.  I just don’t understand that mindset.

However, as the subject of trolling gets more and more media coverage, with people even being prosecuted for tweets they’ve sent, I’m beginning to find the word Troll used on Twitter more frequently. Often in the wrong circumstances.

Take this week for example. There was much discussion and debate taking place on Twitter regarding the incredibly sad and thought provoking documentary How To Die: Simon’s Choice.

If you watched the programme itself, you’ll know it covered an incredibly emotive subject. As I’ve previously written, the debate surrounding Assisted Dying is one that most people have an opinion on and I cannot see sign of abating anytime soon.

A Tweeter had given their opinion using the hashtag #howtodie – their stance on the subject was that the BBC were promoting suicide.   Something that I don’t agree with and neither did someone else on Twitter that day.

I watched with interest as a debate ensued between a couple of Twitter users, some firmly in the anti-choice camp and the other firmly in the pro-choice.

Both welcome to their opinions and both sticking with their views.

All the pro-choice Tweeter had said was something along the lines of stating the fact that there are others who take a different view, and no one has the right to impede on exercising personal autonomy.

A point that I have to agree with.

Instead of accepting this mooting point and perhaps articulating their stance on the debate, they accused the author of the above tweet of being a Troll, discussed blocking him and called him a DiD supporter (Dignity in Dying).

Me being me, I had to get involved at this point. I asked all involved to explain to me how this person was a Troll.  All he’d done was offer up his very eloquent and pertinent point on a discussion.  A discussion that was being held in a public forum.  Because that’s what Twitter is, a public forum full of debate and discussion, especially when hashtags are used.

To my surprise (!) I didn’t receive an answer to my question. However, am glad I said something.

I’ve had many a debate with people on Twitter about all sorts of topics, never would I call them a troll unless they took a personal and unnecessary swipe at me.

Just because someone has an opinion that differs to you, it doesn’t mean they’re a troll, so PLEASE can we stop banding this word about willy-nilly.  Have the courage of your conviction, stand up for what you’re saying.

Debate, revel in debate for all eternity, it’s great these discussions are taking place, but the second someone disagrees with your point of view (in an articulate way) please think before you pull out the Troll card.

From Boyfriend & Girlfriend To Mum & Dad

I’m On My Soapbox: The Real Cost Of Benefit Cuts