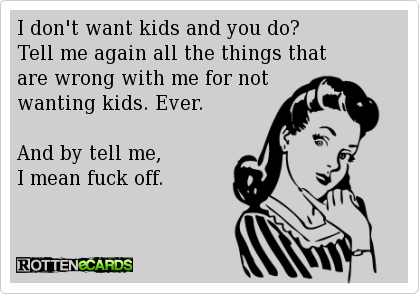 A topic that has been mooted over the last few days surrounds the subject of women who don’t have children. Following an article which featured an interview with Scotland’s First Minister; Nicola Sturgeon, The Sunday Times came in for a barrage of criticism because alongside the interview in which Ms Sturgeon talked openly about a miscarriage she had, the paper, perhaps rather ill advised, decided to display a list of childless politicians who were all women.

The sad thing about this is the fact that Nicola Sturgeon raising awareness of miscarriage has now been marred by The Sunday Times trying to making a cheap point about ‘barren women’.

Following this, the daytime television programme This Morning conducted a phone in, whereby they asked “Should women who don’t have children explain themselves”.

Explain themselves to whom I questioned?

Who exactly has a woman who has taken the decision not to have children justify themselves to? Their friends? Family? The general public?

Big fat hairy bollocks to that.

Having a child is a choice not an obligation.  Just because someone was born into this world as a woman it does not automatically mean they have to reproduce.

There are so many options out there to women these days that don’t just extend to having a family. In an era where we have our second female Prime Minister and the next President of The United States could well be Hilary Clinton, now more than ever, the world is a woman’s oyster.  The opportunities can be endless.  Calling a woman out for her remaining childless is as offensive as it is ridiculous.

I often think, when it comes to societal pressure, us women can’t do right for doing wrong.

Focused on your career?  You selfish megalomaniac, I bet you’re a right bitch.

Stay at home Mum?  You’re lazy and bone idle. I’m probably paying for you to watch Jeremy Kyle all day.

Working Mum?  You can’t have it all, something has to give.

No matter what we do, we’re judged. Open to criticism.  Our lives seemingly up for discussion.

And I’ve had enough of it.

Life is bloody difficult. Being a Mum is bloody difficult.  Sometimes just getting out of bed in the morning is bloody difficult.  But we stick a smile on our tired faces and go about our day as best we can.   Ensuring the plates we’re trying to spin are always kept afloat, that everyone around us is content and happy.   So, why are we so quick to berate one another?  Why are the media so intent on bashing us women for the way we live our lives?

It’s not just the subject of women not having children which seems to get the media in a tizz, it’s often the way we look, our relationships, even down to the choice of clothes that we wear.

The Daily Mail (or The Daily Fail as it’s affectionately referred to as) is the absolute worse for this. The ‘writers’ behind the Sidebar of Shame just can’t help themselves.

How about, Mail Online, she’s just sat on the beach in a bikini like millions of other women across the world. Where’s the showing off?  Is she stood there with a placard round her neck saying “LOOK AT MY BODY, ISN’T IT AMAZING?” No, she isn’t, now fuck off.

Where’s the flaunting? She’s wearing clothes, whilst walking down the street. Just like I do on a daily basis.

Impossibly flat. How can it be impossibly flat, when it is flat?  What a ridiculous headline.  And teasing her toned legs?  She’s stuck a pair of trousers on which happen to show a bit of leg.  Who is she teasing you absolute morons?

To be honest, I’ve stuck this one in here because if there’s 2 words that incite a rage within me then it’s perky and assets. They’re boobs and while we know they’re big is she really showing them off?  What’s she meant to do?  Meander about the place with a roll neck top in the height of summer?  Please.

So, with all this mind. With the fact that we’re berated if we have no children, condemned if we have 4, chastised if we happen to wear a slightly low cut top, I’m throwing my hands up in the air and saying fuck it.  Fuck the media.  Fuck society’s pressures and fuck the opinions of those who don’t matter.

I’m living my life just the way I want to and I could not give a rat’s backside if that doesn’t fit in with what is deemed right or appropriate.  If what I do, if the decisions I make offend you then look away.   Nothing to see here. 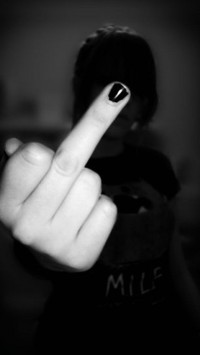