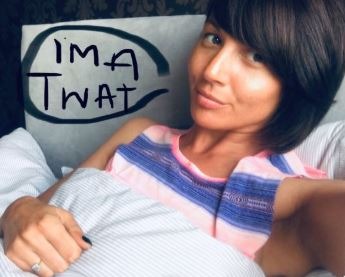 August 10th: Roll on September 1st. I’m deffo packing in my recently rediscovered smoking habit. I’ll be back to declaring myself a non-smoker with pride.

The annoying thing is, I’m so close to my ‘3 year giving up smoking anniversary’. October 3rd 2016 was the day I decided I’d smoked my last cigarette. I was sat outside the airport in Marbella, barely functioning after an hours sleep, I don’t know how I even managed to light the bloody thing to be honest. But as I was smoking that cigarette, desperately trying to stop the horrendous flashbacks of one very heavy weekend, I decided in that moment that I’d had enough of smoking. And I did it. For 2 years and 10 months I was a non smoker.

And they’re right you know. There’s nothing worse than an ex smoker. They’re a million times more judgemental than a non-smoker. They practically revel in their sanctimony. I did. I’d pull a face if I was stood close to someone puffing away on a fag. I was so internally proud of finally managing to smash the shit out of a habit I’d had since I was a teenager.

And now look at me. Actually don’t, because I swear I can already start to see the side effects of my recently resurrected routine.

And don’t even get me started on the money I’ve spent. It’s sickening. Much like my breath.

I will give up. I know this sounds awfully like a platitude but I will, one day, put a cigarette out for the final time. Just not yet.

I’m not setting a date on when that final fag will be inhaled. I tried to put a date on it before and that went tits up. Much like whenever a new week rolls around and I declare I’m going on a diet and I’m going to do 10,000 steps per day. Before you know it I’m practically dancing down the confectionery aisle at Sainers throwing bags of Cadbury’s buttons in to my bag like I’m in Willy Wonka’s Chocolate Factory.

Life has been tumultuous over the last few months. To say the least. And I know I’ve used smoking as a crutch. It’s that little bit of me time where I can go and sit in my garden and for 5 minutes or so just get some space to think or to not think. Just to be. And with that first drag of a fag I can temporarily feel the weight on my shoulders start to slightly life. Albeit temporarily.

Life will, inevitably, calm down soon. And my need for a cigarette will follow suit. Yes, I’m disappointed in myself. Three years of a being non-smoker all gone to shit. But as someone once told me, recovery from addiction isn’t linear. In fact, recovery from anything isn’t always linear.

Regrets? I’ve Had A Few.