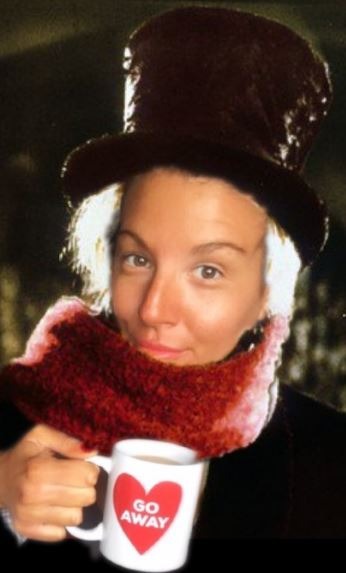 I have a love/hate relationship with the C word.

That C word being Christmas. Get your minds out the gutter you filthy lot.

I actually shuddered when I typed it out. I nearly choke on my words when I say it aloud.

In recent years, it’s been a relationship more of the love variety. However, this year, I’m firmly in the hate camp. It’s only 29th November and I’m already sick to the back teeth of hearing about it.

When I get up of a morning, one of the first things I do is go downstairs, switch the radio on in the kitchen and make myself a cup of tea. Since Friday 22nd November, every time that radio goes on my ears are filled with the sound of Mariah Carey informing me of what she wants for Christmas (clue: it’s you), or George Michael telling me that last Christmas he gave me his heart but the very next day, I threw it away. I’ll tell you what I will throw away one of these days, that bastard radio.

But what’s changed? You might not ask. Why is Christmas 2019 leaving you feeling Scrooge-like but Christmas 2018 had you swinging from the tinsel?

This Christmas will be very different from festive periods gone by.

Back in March, March 29th in fact, I called time on my long term relationship. Instead of leaving the EU as we were apparently supposed to, I decided to dissolve my own union. Brexit became Rexit.

It has been, without a shadow of doubt, the hardest 8 months of my life. To describe 2019 as an emotional roller-coaster wouldn’t do it justice. I have never been more ready for a New Year in my life. But don’t worry, I won’t declare ‘New Year New Me’. It’ll be ‘New Year Same Old Dickhead Me’.

As Christmas draws ever closer, I can feel the anxiety and stress rise. What will it be like? Who will be where? Will this sadness increase as December progresses?

It’s not about regretting anything. It’s not about wondering if I’ve done the right thing or doubting myself. I guess it’s almost a fear of the unknown. Of course, I’ve been single at Christmas many times before, although those Christmases looked distinctly different to how Christmas 2019 will probably look (no stumbling through the front door half cut at 7am on Christmas Day morning, having to wrap presents I’d only bought 15 hours previous).

If I didn’t have my son, I could just pretend Christmas wasn’t really happening and use it purely to take advantage of the festivities that occur. But December is, for so many reasons, a really important month.

For a start it’s his Birthday next week. An occasion that provokes many different emotions, anyway. I always feel a tinge of sadness at the thought of him growing up so damn quickly. Happiness and pride that he’s in my life and I have the pleasure of watching him grow into the amazing little boy he is. And anxiety as I remember the incredibly traumatic birth I had and the year of horrendous Post Natal Depression that followed.

Also, December is a month that is drenched with memory. I met my ex in December, we got engaged on Christmas Eve, obviously welcomed our son and had so many happy times. And that’s hard. Just because we’re no longer together, it doesn’t mean feelings can’t be felt, or memories can’t be remembered.

I remember the day he moved out back in September. Although there was relief, there was also the most overwhelming feeling of sadness. Sadness that things hadn’t worked out. Sadness that everywhere I looked there were memories of happier times. And Christmas is an occasion that ramps those feelings up at an incredible rate.

I know there will be thousands upon thousands upon thousands of people who will be going through the same thing this year. Feeling the same apprehensions and anxieties. Waking up in the morning and wishing they could fast forward to that first week of January when normality resumes. Failed New Year resolutions aplenty. Relief to see the back of the hype once again.

I want to do my level best to ensure my son has the best Birthday and Christmas, even though my heart isn’t in it and often my mind is elsewhere. He’s already seen so much upheaval this year and dealt with it like an absolute champ, I don’t want him to look back in years to come and Christmas 2019 stand out for all the wrong reasons.

Perhaps it’ll be fine. Perhaps these fears and anxieties are ill-founded. In fact, perhaps as December progresses, it’ll actually be OK and I’ll get right into the swing of things. Perhaps when I hear the first chords of those over-played Christmas songs I won’t feel overwhelming sadness, or an empty, sick feeling in my stomach.

But for now, this is me acknowledging that a sadness is there.

Have The Judges Got The X Factor?

Am I A Feminist?