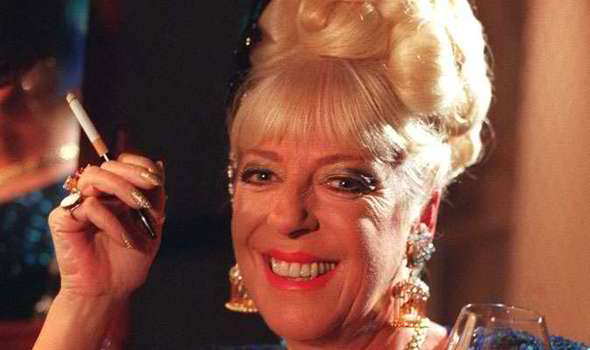 I’ve got myself a new obsession.

This happens a lot. I’m someone who gets obsessed with things or with people and often, as quickly as I’m hooked in, suddenly I get turned off. Probably explains why I’m so shit at relationships.

My latest obsession comes courtesy of the channel ITV3. They’ve been kind to us soap lovers and have commissioned classic episodes of the only two soap operas I watch – Emmerdale and Coronation Street. The latter being my absolute favourite. For one fundamental reason.

I was too young to appreciate the wit and wisdom of the iconic character the first time around so I’m extremely grateful to ITV3 for reintroducing her to me at this point in my life.

Sassy. Clever. Hilarious. Strong. Feisty. Vulnerable but resilient. Assertive but kind. She’s everything I admire in a woman. You can tell she’s loved hard and been hurt harder. She’s someone I’d want to sit down in the Rovers with when last orders have been called. We’d pour a bottle of Pinot, spark up a fag and put the world to rights. I’d be sat opposite her, eyes wide open with eagerness and excitement, drinking in her stories and wishing I was her. Both having a penchant for leopard print, I know exactly what I’d be wearing an’ all.

One of the best things about Coronation Street has always been its incredible scriptwriters. The soap has been lucky to carry that through over the decades. And personally, now I watch both current and classic Corrie, I think the script was at its best when Bet Lynch was at the helm of the soap. Her rapport with the other characters was a sight to behold.

I’ve had to write down some of my favourite Bet lines. Because I think we can take something from the glamour-puss’s pearls of wisdom. Some I’ve shared with my girls in our group chat. Some I’ve rewound a few times just so I can hear her utter them again and again.

See, I told you I’m obsessed.

‘Ang on while I light me breakfast.

When you think of Bet you think of her puffing away on a ciggie, which in true Bet Lynch style will be stuffed into one of her iconic holders (true story, I had one back in 2002. I don’t know who the fuck I thought I was.). And seeing as I’m now back on the cigs myself, I had to include this line considering one of the first things I do of a morning is spark up. Vile, I know.

I’ve got tights older than you, love

I’d probably say pants if it were me. But the intention is the same.

Poetic. I’m currently smiling my way through a particularly bad spell of PMT. It won’t last. The smile that is.

We’ll have to pile them up. And do it all again won’t we.

It’s not the quote. It’s the context. Bet has just learnt that Charlie, her boyfriend, is leaving her for that BITCH Tanya Pooley (they don’t make soap bitches like her anymore). And instead of falling to the floor in a pile of tears. Or shutting the Rovers so she can seek solace in a bottle of brandy and a packet of B&H, she simply walks out to the packed pub full of locals who have been piling up coins for charity, and greets them like nothing has happened. Despite the fact you know she’s dying inside. Balls of steel.

You should have a man, walking in front of you, with a red flag

This is my favourite. This went straight into the WhatsApp group.

Bet imparted this particular piece of wisdom to the aforementioned Raquel, when she’d discovered Des Barnes was knocking off Ultimate Bitch; Tanya Pooley. There’s that name again. Tanya may have only been in Corrie a short while but she didn’t half make a name for herself in the process.

She’s right though is Our Bet. When you’re in the thick of the grief and you feel like your heart will never mend and this is basically your life forevermore, time will do its thing. The world still turns. You still take your steps and go about your business, with whatever it is weighing heavy on your shoulders, until one day, that heavy weight begins to subside. And one day, you wake up, and you realise today is better than the day before, and the day before that. And the pain that tore through your body, the turmoil you thought you’d never recover from is just a part of your story.

And then you hit another fork in the road and go through it all again.

Why Has The X Factor Lost Its ‘X Factor’?